How to “Snoop” Your Cell Phone

How to “Snoop” Your Cell Phone

Over the years, many retailers have experienced hacking attacks. Many customers have reacted angrily when it was discovered that sensitive information was at risk due to various security breaches. Most people don’t even realize the personal information shared by their phones every minute. This includes not just the providers, but hackers who can pick up signals emitted from smartphones.

In the past, the Federal Trade Commission examined and detailed this issue in a series of articles. The FTC discussed how smartphones interface with WIFI by sending out probes constantly looking for networks. It is easy for someone to set up wireless sensors that record and track your location. So, no matter what your activity is, your location can be revealed.

Each Phone is Unique

Every smartphone has a unique identifier called a MAC address. This identifier basically broadcasts and is received by anyone who has the right WIFI receiver. The MAC address for your phone remains the same no matter the what the network is and transmits without even going on the internet.

This type of technology helps with loyalty programs and virtually eliminates the need for ID cards from various vendors such as hotels and airlines. By monitoring and tracking the movements of users, these businesses can also lay displays out more effectively based on customer patterns.

Many people have expressed that they feel uncomfortable knowing such abilities exist to track and monitor their behavior. To make sure you are not tracked at all, you need to make sure you turn off all location and WIFI capabilities. 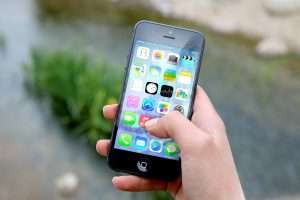 Also, be mindful that smartphones are vulnerable in another major way through their cellular signals. An interesting demonstration a few years ago at an RSA Security Conference showed how an ordinary person could intercept cell phone calls and data. This could be accomplished creating a desktop cell phone tower for less than $1,500.

Devices on the market include those that allow you to block, intercept, track, follow, record and listen to communications. This is done using triangulation as well as other advanced technologies. These products are intended to be used only by authorized government agencies.

Users need to take a stand and show their concern over others snooping on our cell phones and how we use them. This includes taking steps to increase communications security overall. This is becoming a major issue and it is already drawing a lot of attention.

There is even an interesting product which is specifically designed to be “private” in every way. The Blackphone was developed by SGP Technologies to ensure privacy and is designed with that purpose in mind. So, as users become more and more aware of the issues related to privacy, the industry has responded with answers. This is because peoples’ opinions and concerns are be being openly and honestly discussed.

So, Cyber security will always be an important issue to be mindful of regarding our cell phones…